Photo review: Around the world in 16 events

Whether in Abu Dhabi, Australia, Botswana, Ecuador, or Vietnam; PMR evolution and hybrid solutions have been hot topics in this year's events. Can you spot familiar faces or places in this photo review? ISNR - the International Exhibition for National Security and Resilience - in March featured a huge live demonstration. The set-up included a live-sized airplane, crashed into a chemical plant: Atlas Telecom is our partner in the area. TETRA solutions for reliable communications were strongly featured at their exhibition stand: Critical Communications World 2016 saw the big leap in TETRA evolution take place in the shape of Tactilon Dabat, the device that is both a smartphone and a TETRA radio. There was a special Critical Communications Finland stand: Finnish authorities presented how they use communication solutions developed in Finland. The Critical Communications Finland stand was full of people almost all the time. The live demos showed very clearly the benefits that they have gained from the VIRVE TETRA network and from the smooth co-operation between different organizations. Visitors could also see how advanced TETRA and LTE applications can bring more benefits for user organizations.

The Airbus stand was also packed: On the CCW conference side, the BDBOS panel presented the current status of Germany's nationwide BOS authority network. The panel discussed the use cases of TETRA paging and how the BOS network provided good radio communication coverage and capacity for a large VIP summit that was held in the mountain region in Southern Germany. Camera teams were busy at the Critical Communications World:

The conference speakers left the audience with quotes that may be remembered long after all the speeches ended. Download the set of ten of the most inspiring quotes from CCW speakers. They captured the essence of the critical communications industry in 2016.

TETRA in Botswana was the first event in the TCCA series in 2016: Views from the exhibition area at the Colombia seminar in Bogota: The Ecuador seminar was held in the city of Quito (2800 m above sea level):

The topic of hybrid networks was present in many of the TETRA in Ecuador seminar speeches: The TETRA in Vietnam event in November concluded the TCCA series for 2016: In September, healthcare professionals from the Hospital District of Helsinki and Uusimaa had the opportunity to participate in a two-day seminar dedicated to professional communications. Not only radio communications, but the chain of solutions from emergency response centres to field command. The Astrid authority network in Belgium is preparing for the future. The network operator organized a special event for its customers in October 2016.

Scene from the exhibition - Minister of the Interior, Jan Jambon, takes a look at the Tactilon Agnet solution at Airbus stand:

Tactilon Agnet is a professional application which brings TETRA communication services into a smartphone, in a secure way: The venue of Astrid User Days was interesting. This event was held at the Stayen stadium in Sint-Truiden. The open space and spectator stands made it possible to present outdoor demonstrations of drones and vehicles: There was also ample space indoors, suitable for the seminars and the exhibition.

RadioEXPO 2016 - a PMR Conference and Exhibition took place in Warsaw, Poland in October. RadioExpo is Poland’s only exhibition and conference that is dedicated for the Professional Mobile Radio industry.

Visitors were interested in Ilkka Kervinen's presentation of the TETRA system that can be deployed in 10 minutes:

This visitor found something interesting in the new issue of Key Touch magazine: The PMR Forum in Beijing was the 33rd PMR Forum organized. The evolution of TETRA solutions as well as the new possibilities offered by the TETRA and LTE hybrid solutions were hot topics both in the conference speeches and in the exhibition area.

An airport in Vaasa on the western coast of Finland was the site for a special major emergency exercise in October.

The participants in the exercise got to test a new triage application which works over TETRA.

Professional apps - whether TETRA or broadband apps - bring new possibilities for primary care, for patient transport, and for hospitals.

Listening to the visitors at the stand, it was clear that they see hybrid as the path of evolution.

Saudi Arabia is one example of a country that is embracing the hybrid model. New mission critical communication solutions were presented in STC Saudi Telecom exhibition area: Many conference presentations at the CC MENA event discussed PMR evolution. A number of interesting use cases for TETRA radio communication solutions were featured. PMRExpo was organized for the sixteenth time from 22 to 24 November 2016 in Cologne, Germany. Melbourne was a happening place in 24-25th of November during Comms Connect. This event has grown to be the number one meeting place for those involved with professional communications across the region. Everyone wanted to learn how to combine TETRA and LTE in the smoothest possible way. And that's a wrap of the 2016 events! The next event on the agenda is the Critical Communications Europe event in February 2017. See you in Copenhagen! 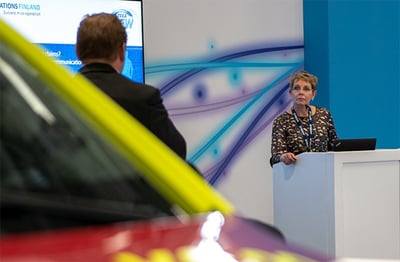 The doors to Critical Communications World (CCW) closed in Berlin on 17 May 2018 following three days of intense activity. It was busy, it was tiring, but it was also very informative and... This year saw my second CCW event, but it was far from being a case of “Déjà-vu”. In my earlier blog post I promised that Airbus would not repeat itself and we did some things very differently. ...