This pioneer project, led by France, is key to modernising domestic security forces which are still using narrowband technologies Today (Tetrapol). The Réseau Radio du Futur will be a national, secure and high-speed (4G and 5G) priority mobile communication system, with a high level of resilience in order to guarantee the continuum of security and emergency rescue missions on a daily basis, including in the event of a crisis or major event.

The RRF intends to equip up to 300,000 users in the security and emergency rescue forces, such as the national gendarmerie, the national police force, firefighters and other civil security forces. It will allow these users to benefit from many new data-centred services, such as video, in particular (via MCVideo).

With the RRF, the Ministry of the Interior modernises the tools it provides the security and emergency rescue forces to help them carry out their daily missions as well as major diplomatic or sporting events. It represents a new chapter dedicated to improving increasingly complex interventions.

France among the first countries to deploy such communication tools

The RRF deployment will make France one of the 5 pioneering countries providing its security and emergency forces with new generation communication tools. Among them, there is the United Kingdom with the ESN network and the ESMCP project, the United States with FirstNet, Finland with Virve 2.0 and South Korea with SafeNet.

The RRF is a major digital transformation project for the French Ministry of the Interior. It is part of the orientation and programming law of the Ministry of the Interior 2022-2027 (LOPMI) that will give to the State modern means to manage present and future crises (public order, delinquency and crime, civil security crises).

October 13, 2022, the consortium led by Airbus and Capgemini was selected by the French Ministry of the Interior and Overseas territories for the role of Package 2 integrator for the Réseau Radio du Futur (RRF – radio network of the future).

A signing ceremony was organized that same day at the Ministry of the Interior ("Place Beauvau" - Paris) in the presence of Mr. Gérald Darmanin, Minister of the Interior, Mr. Guillaume Faury (CEO of Airbus), Mr. William Rozé (GM of Capgemini Engineering), Mr. Benoit Torloting (GM of Bouygues Telecom), Mr. Gervais Pellissier (Associate GM of Orange) and Mr. Yannick Tricaud (Head of Southern Europe Region at Atos) as well as other guests.

Find here the official photos of the ceremony: 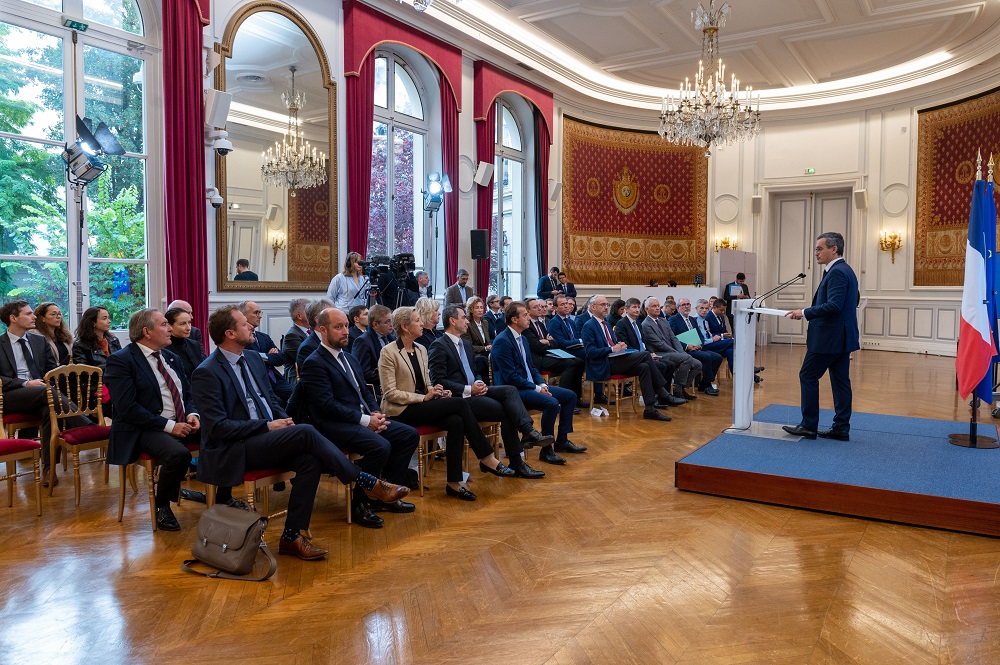 The Minister of the Interior, during his speech about the RRF in front of the guests at the ceremony. 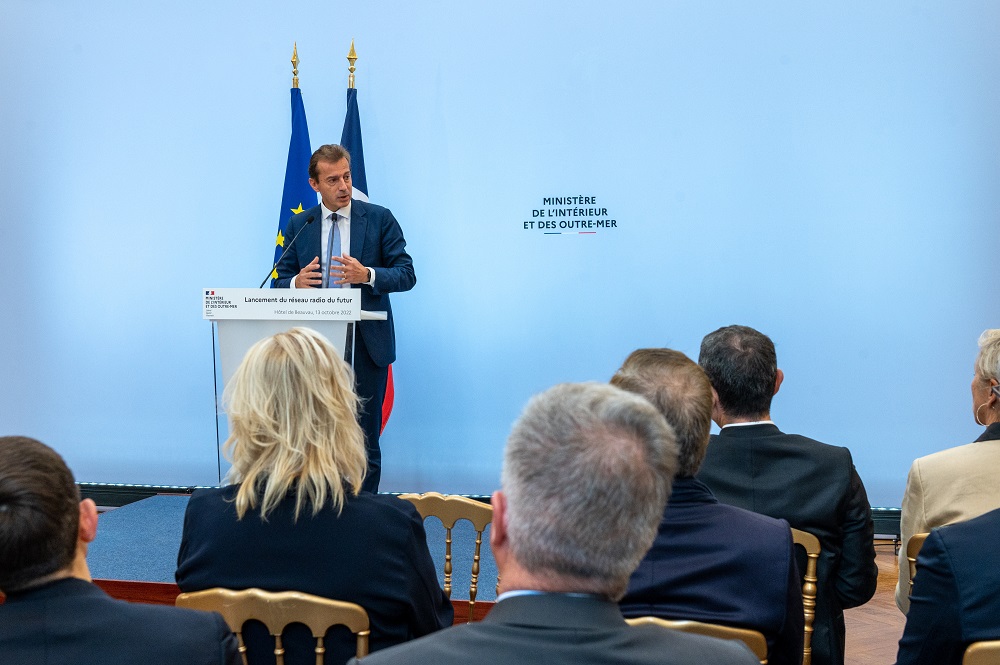 Guillaume Faury, CEO of Airbus, during his speech about the RRF, higlighted that the Airbus teams and the partners are all commited on the project in order to provide a sovereign and secure solution to the French security and rescue forces. 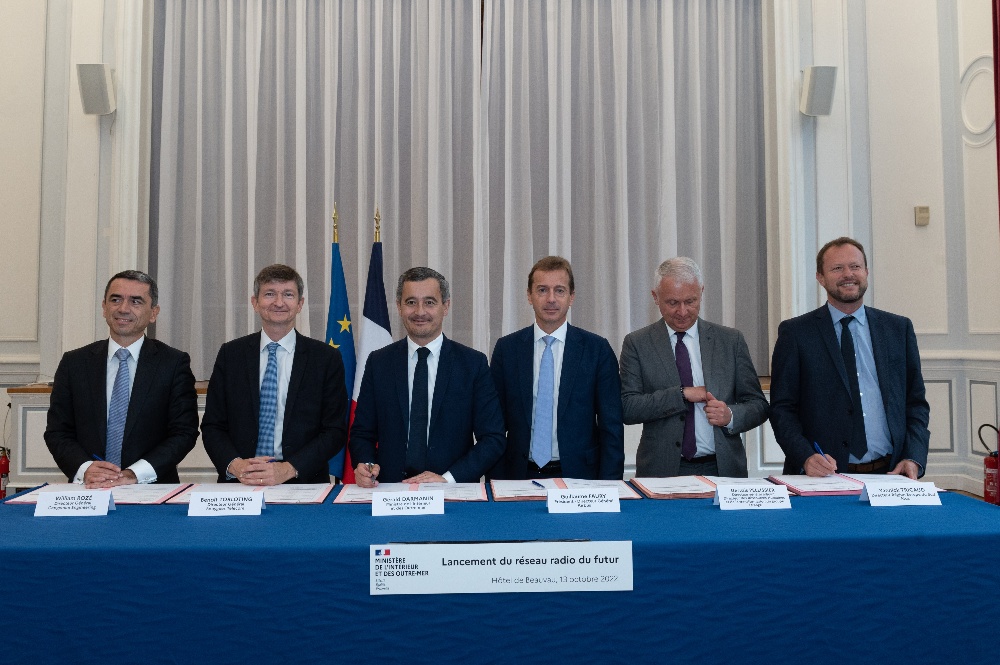 The consortium led by Airbus and Capgemini relies on a wide variety of partners such as Dell Technologies, Econocom, Ericsson, Prescom, Samsung and Streamwide in order to offer a unique solution to France and meet the needs of French security forces, in short-term as well as in long-term.

The consortium is thus mobilized alongside users to support them in the gradual deployment of these new technologies in the coming years.

Capgemini Key player for digital transformation projects for public services as well as for critical projects related to networks, telecoms and 5G.

Econocom Econocom designs, finances and facilitates the digital transformation of large companies and public organisations. With 49 years of experience, Econocom is the only player in the market to combine 360° expertise through project financing, equipment distribution and digital services.

Ericsson Ericsson is one of the main telecom infrastructure providers, a partner of the majority of French telecom players and/or operating in France.

Prescom Leader in the design of communication systems for command and control rooms and interconnection gateways between heterogeneous networks.

Samsung Samsung supports thousands of businesses in their digital transformation, offering them a wide range of innovations and state-of-the-art mobile devices with a commitment to data security.

The best of critical communications for the RRF

For the RRF deployment, security and emergency forces can rely on Airbus' expertise in broadband critical communications solutions (MC-X).

The Airbus' advanced and critical collaboration solution, Tactilon Agnet, has been awarded "MC-X Solution of the Year" at this year's ICCA Awards: Read the press release for more info. 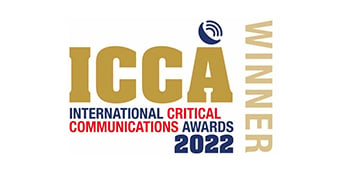 Airbus Cyber ​​Programmes, a key player for the RRF cybersecurity

The Cyber ​​Programs business unit of Airbus Defense and Space, a European leader in CyberSecurity solutions, is heavily involved in securing the global architecture of the RRF through the integration and deployment of VPN concentrators, firewalls and a vulnerability analysis solution.

In close collaboration with the Secure Land Communications teams, Airbus Cyber ​​Programs will also deploy security monitoring components and enclaves (with intrusion detection systems and event log collectors) compliant with the laws of this sector for SOC activities, ensuring the security of all the RRF system.

Airbus experts are looking forward to hearing about your needs

Airbus' professional communication and collaboration solutions are suitable for mission-critical and business criticals, as well as for various players in industry, transport or energy.

With Airbus, you are guaranteed to benefit from a durable, secure and highly resilient solution.

Want to discuss about your project with one of our experts?
Leave us your contact details through this form so that we can discuss as soon as you possible.

"Compared to the current solution, the range of services proposed as part of the RRF is very innovative"

In this interview from the Security Defense Business Review magazine, Olivier Koczan, CEO of Airbus SLC tells us more about the RRF  project and how French security and rescue forces will be able to take the most advantage of the new technologies.