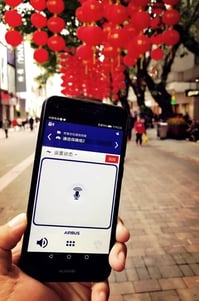 The annual conference, hosted by Fortune magazine, took place from the 6th to 8th December. Around 1,000 conventioneers attended the forum of international commerce, such as international politicians and senior business executives from more than 150 of the world’s top 500 companies.

In order to ensure the smooth running of the event, 1,000 government members of staff were equipped with smartphones provided with the Airbus application Tactilon Agnet. The app allowed officials to communicate securely and simultaneously in groups with the local authority organisations, who were using their mission-critical Tetra network during the event. At the same time, Tactilon Agnet and the tens of thousands of Tetra users were dispatched from the same command and control centres.

Guangzhou information Technology Security Evaluation Center, responsible for administrating the Guangzhou Tetra Shared Network, confirmed in a statement that “the unified command control of Tetra and LTE were adopted and the Tetra network provided good performance during the Fortune International Forum”. Moreover, the Tetra and LTE convergence platform “ran smoothly and led to the success in securing this international event”.

“For the first time in China and Asia, the convergence application for secure narrow- and broadband communications has been implemented by Airbus. Therefore, this year’s Fortune Global Forum marks another milestone,” says Selim Bouri, Head of Sales and Program Delivery Middle East and APAC for Secure Land Communications at Airbus. “Again, after providing professional mobile radio technology for the Belt & Road Forum in 2017, we have demonstrated convincingly our expertise and experience in secure communications for this year’s outstanding convention.”

Protected wireless communication was entirely integrated during the event into the Guangzhou Government Shared Tetra network for public safety. It now consists of four Tetra switches and around 400 Tetra base stations. As well as 45,000 subscribers from various authorities, including the emergency response office, the police, rescue services, fire departments, the city administration and other governmental institutions.

The Guangzhou Government Shared Tetra network, the second largest city-wide Tetra network in the world, was set up in 2010 and supported the Asian Games in the same year. Airbus was selected as the official Tetra equipment supplier and since 2009, Airbus has been upgrading this network in Guangzhou: besides a complete migration to the latest version of Internet Protocol (IP), the system will also cover the city’s new metro lines. In 2018, the network upgrade and extension will be concluded and it will reach six Tetra switches and around 540 Tetra base stations.

Guangzhou, a city of international trade for many centuries with around 13 million inhabitants, attracted investments from many Fortune Global 500 companies. Half of them have already made investments or set up operations in Guangzhou.

Airbus is a global leader in aeronautics, space and related services. In 2016, it generated revenues of € 67 billion and employed a workforce of around 134,000. Airbus offers the most comprehensive range of passenger airliners from 100 to more than 600 seats and business aviation products. Airbus is also a European leader providing tanker, combat, transport and mission aircraft, as well as one of the world’s leading space companies. In helicopters, Airbus provides the most efficient civil and military rotorcraft solutions worldwide.

Secure Land Communications (SLC), a business unit of Airbus, develops, installs and maintains professional and land mobile radio (PMR/LMR) networks based on Tetra, Tetrapol, P25 and LTE technologies and offers a wide range of radio solutions and devices for customers worldwide. The portfolio also encompasses mission-critical broadband solutions based on 3GPP standards and emergency response centres (911/112). SLC is a leader in PMR, with more than 280 radio networks in over 74 countries, and the US leader for 911 response centres with the VESTA 911 call handling solution serving more than 60% of the market. SLC employs nearly 1,700 people in 20 countries.