Modern pagers don’t just go beep. Two-way comms let you know exactly who is coming to help with your emergency.

In an emergency, you need to alert the right teams. But what if your paging system can’t tell you if the alert has gone through? The people alerted need to phone back, which is very inconvenient. Maybe your paging system is also near the end of its life, in which case alerts may not even always work.

Then again, what about the pager itself? When you think about one, you may imagine a small beeping device that simply displays a number to call as soon as possible.

If you do, then your image of a pager is out of date. Paging today can offer so much more!

The basic idea of course is the same. The pager alerts people on call when they are needed to help handle a critical situation.

But in the modern world, simply displaying the number to call is no longer enough. Dispatchers want to deliver more information to the alerted people. So instead of old-fashioned paging, active paging is the new must-have.

For instance, an active paging device can show the priority or severity class of the alert and start a timer running. The user must accept the alert before the timer runs out, or the system will record that they’re not available. The dispatcher can see right away who is and is not available.

An active pager is so much more than a simple beeper. Two-way paging can solve so many problems usually associated with paging. Active paging means, for example, no more alerting staff and hoping for the best. Instead, the two-way solution delivers real information on who is available.

Handpicked related content: "New ideas for paging".
Paging today can be so much more than people on call carrying a simple beeper. TETRA paging can be active and two-way, and give benefits for dispatchers.

How does active paging work in practice?

Here’s a video that shows how volunteer firefighters are alerted with an active pager. They get the alert – and the dispatcher gets their response right away and knows who is available and who is not!

Or would you rather try it yourself?

Remember to “turn on” the virtual pager by keeping the top right button down for two seconds.

Want more information? Download this magazine article on experiences from a pilot on active paging at a Finnish hospital. 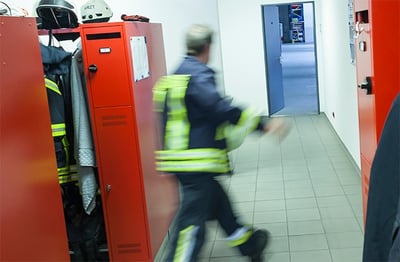 Think about a pager. Did you imagine a small beeping device? That only displayed a number to call as soon as possible? If you did, your idea is old. Paging today can offer much more!