Could these nine professional applications work for you too?

We hear a lot about public safety applications, or apps, designed for professionals, but how would they work in real life? How would a police officer or paramedic actually use them to make their working day go more smoothly?

Take police officer John, for example. During the first half hour of his working day, he could easily need and benefit from the following nine apps – and more.

John is a police officer from a town called Securicity, and he has some useful new technology at his disposal.

John’s morning routine begins at home and includes a large mug of coffee and reading the latest news on his tablet. And he can start his shift even before he drains his drink. He logs into the Police IT environment using his rugged smartphone and gets secure access to all the IT systems that he needs. In addition, he can use the professional apps that his department has approved and set up for his use.

Application 1: Single Sign On (SSO) - With secure SSO credentials, John is securely logged in with two factor authentication to all the apps he needs.

Now that he’s logged in, he can use his smartphone apps in a secure way.

John first checks the department schedule to see what he is doing today and who else is working. He sees that he will be on patrol on the west side of town, Securicity, with a colleague named Tracy.

He uses the smartphone to send a secure text to Tracy, telling her he will pick up their patrol car and then pick her up in 25 minutes.

Before leaving home John checks the night shift’s message board to get a picture of what is going on and if there are any special risks to consider today. He also uses his security approved internal social media app to check what is being discussed in the community and the control center - other officers can also automatically share relevant #hashtags to monitor.

Securicity has recently seen a trend of rioting youngsters - using the message board has helped the department track the culprits and prevent several potential riots. This has been done just by sharing and collaborating – there was no need for a social media department.

Application 4: Message board. The shift ending can easily communicate with the starting shift, with no need to involve the busy control center.

Application 5: Specially designed social media application, security approved to be used on police smartphones and tools to easily share important messages and hashtags between and inside departments. This app gives fast, non-mission-critical communication within and beyond the department.

As he leaves home, John changes his presence via smartphone to On Duty. His Control Centre knows he has reported in and can receive tasks, calls and messages. They also see John’s location on the map and that he is logged into the IT environment with his smartphone, using a LTE connection.

Application 6: Enhanced presence. Show the status of officers and their devices’ capabilities.

Application 7: Location application can share the location of all officers and current tasks. When in the patrol car, John plans the day’s patrol route. He can also see which areas other teams will patrol.

Application 9: Route planner. With a real time route planner, officers can easily plan their routes for the day and ensure other users will know where they are.

With a real-time view of all the planned routes, the head of the department can see that his officers will again be very visible on the streets of Securicity.

John has used nine apps in the first half hour of his day – with a full shift ahead, we can only guess at how these and other apps will help him meet the challenges of the rest of his day.

What about your daily routine? How many of these apps could help you? 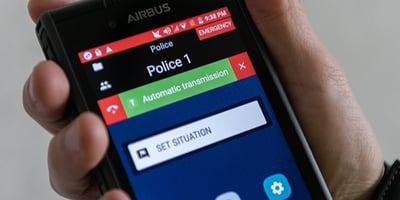 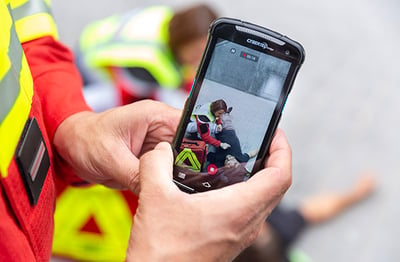 Public safety and other professionals have come a long way with mobile apps, with around two thirds now using apps in their day-to-day work. The landscape is very different from only five years...