Security systems that share intelligence allow for collaboration and go beyond radio communications to empower professionals to focus fully on their mission. Just imagine the following drama -

A chilly spring breeze blows across the city. There’s a buzz in the evening air fed by the excitement of football fans streaming into the championship stadium, anticipating the 8:45 pm kickoff of the cup final.
The public security team is at full strength and on high alert.

Something’s up. In the stadium ontrol centre a screen shows a camera feed of a small group of men drinking heavily near a car in a side street. A police team closes in and scans some ID cards and the vehicle’s licence plate, sending the data via a secure connection to the control room. One of the group is a wanted hooligan and he is arrested immediately.

Spotting the growing unrest at a sporting event

It’s almost 15 minutes into the match now, and an alert window pops up on the controller’s screen. Following a controversial goal, a block of fans inside the stadium is looking unsettled and starts throwing fireworks. There is real danger here.

The local dispatcher takes a secure call from a stadium security team member who uses a convenient one-click app, reporting that trouble is brewing. The dispatcher clicks his screen for instant access to the relevant cameras and can see immediately that the situation is deteriorating fast.

A quick response is vital. Police officers will have to deal with the troublemakers, but fireworks might also cause injuries and fires, possibly even leading to an evacuation of the stadium. Collaboration is needed to prepare a coordinated, multi-agency response.

The good thing is that trouble with fireworks is just one of the many scenarios that the stadium has anticipated. There are procedures in place to handle it effectively.

How controllers know to launch into action

Everything is quiet when the call comes in, with city coordinators working calmly at their stations. Each agency’s coordinator has their own job to do, while everyone can get the same real-time view of the situation around the city from the giant, wall-mounted screen in the city control room.

The room begins to buzz with activity when the city dispatcher takes the call and enters a “stadium alert” into the CAD system. A few clicks are enough to check the availability of resources and the dispatcher begins building his incident teams by activating the automatic resource proposal suggested by the CAD system.

Discussions start to fly around the room between the city dispatcher and the police, fire and rescue coordinators.

The possibility of a stadium evacuation is first on the police coordinator's agenda, and he tells field officers to start setting up designated areas around the stadium. The field officers can immediately see what they need to do thanks to the mapping apps on their handheld devices and vehicle PCs.

Back in the control room, the police controller reviews the footage from the stadium and uses a secure solution to send pictures of the hooligans to the nearest mobile units. They move in to pick them up. Inside the stadium, there’s nowhere for the hooligans to hide since the police officers have their images and can quickly and easily confirm their identities.

The culprits are swiftly arrested and removed.

What is needed for moving rapidly into position

The police controller can now see that the routes to the stadium are clear, so fire and rescue services can start to move in. Over on the fire coordinator's station, fire-fighters and trucks have been mobilised and navigation data makes sure they follow the agreed routes.

Outside, fire trucks start arriving and locate the nearest hydrants using their built-in mapping systems. They move in to extinguish the few small fires that the fireworks have set before they have a chance to really take hold. In just a few minutes, the situation is under control and the genuine sports fans can continue watching the match, where the drama is really heating up.

Thanks to efficient collaboration and to the rapid and coordinated response by the emergency services, TV reports later that night focus on the football action. The “minor incidents” may only get a passing mention.
As the fans make their way back from the stadium, the city starts to relax…

You’ve read the article and learned how different solutions can help the co-operating organisations – now see two videos that show two different aspects of communication and situational awareness in a football match:

See the video "Authorities manage a fire at football stadium"

See the video "Preparation for football match: how to search and identify suspected troublemaker" 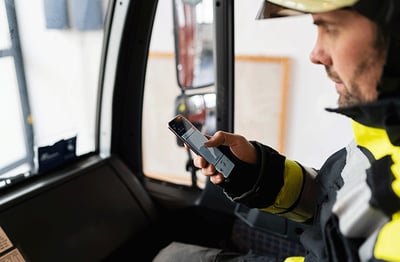 Mission-critical smartphones – Nearly everything you need to know » 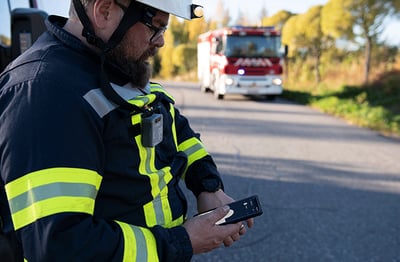 Across the world, public safety agencies are taking advantage of new data services, such as video, data analytics and online field reporting. Compared with conventional voice, these services demand... 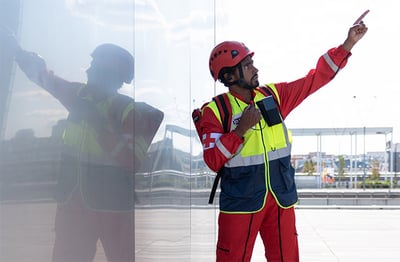 TETRA radio user: 5 reasons you should be interested in MCPTT »

TETRA radios are great and mission-critical communications over TETRA provide excellent service. Your operations may depend on certain ways to use radio communications. So, why should you be...