What everyone is saying about professional apps

The third Airbus survey into the state of the professional mobile apps market ran from November 2017 to January 2018. We analysed the 112 responses to the survey and this blog post summarises what we found.

This post reveals the findings from the 2017-2018 Airbus survey into the state of the professional mobile apps market. The survey was widely supported by interested parties across industry and from all parts of the world, ranging from app developers to those who use apps to improve their daily work. Three surveys have provided a number of insights and revealed what the mission-critical communication users and the industry in general value the most in mobile apps.

1 - Security is users’ key concern and it is evident throughout the questions.

2 - The popular use cases are in line with the fact that users prefer hybrid devices.

3 - The three surveys indicate an upward trend in the use of almost every kind of app.

Results in a nutshell

What’s more, there are clear indications that professional users are ready for mobile apps to be part of their operations, and not merely as an add-on, ad hoc solution for individuals or small teams. To realize this, public safety and other professionals need to plan, design and implement apps in the same way as their other communication solutions.

The survey shows that users have not yet recognized the potential of the latest technological developments, such as virtual reality (VR), augmented reality (AR) or artificial intelligence (AI).

It is the challenging task of application developers to demonstrate not only their expertise in critical communications and in mobile apps, but also in new solutions which take advantage of these new technologies.

The survey responses indicate that organizations may be on the brink of realizing that adopting apps needs to be conducted in a controlled and systematic way.

According to the numbers in the 2018 survey, most users download their apps from generic app stores. This indicates that apps adoption is not being professionally managed. This clearly needs to change if apps are to support the strategic goals of the organization and not merely act as novelties used only by a small number of staff.

A look at the survey results in detail

Who were the respondents?

In total, 112 people responded, including 14 who answered the Mexican Spanish version of the survey.

Survey respondents belonged to a range of organisations, including

Professionals such as police, ambulance and paramedics, as well as other governmental and public safety organizations, are actively and increasingly interested in digital solutions.

Apps are in regular use

The survey asked if user organisations are already using apps regularly. The answer was an overwhelming ‘yes’, with only 22% of respondents not using apps at all.

The most common types of application used daily were

Compared to the 2016 and 2017 surveys, the top three popular services had remained very similar 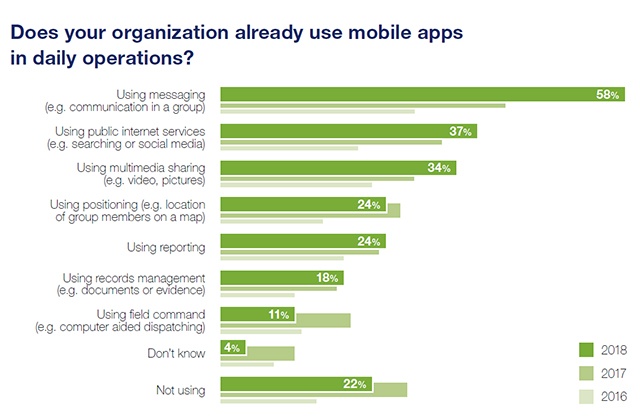 The three surveys indicate an upward trend in the use of every kind of app on the list, except in the use of field command apps such as computer aided dispatching.

A smaller percentage said that they do not know if their organization uses mobile apps.

The most popular apps and devices

As a new question, the survey investigated which apps people use.

The new VR and AR solutions have yet to gain ground.

In terms of the types of device in use, consumer smartphones continue to be the most popular – this year, the figure was around 75%, with laptops the next most popular at 47%.

Rugged smartphones are also used, with around one in four respondents using them. The use of tablets, either consumer or ruggedized versions, is in decline. 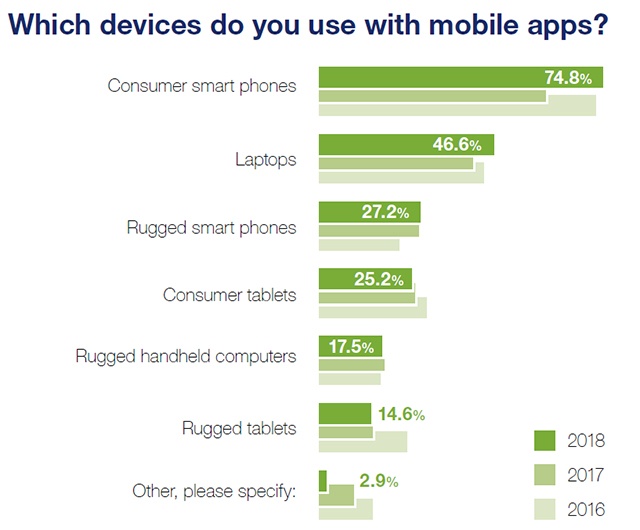 The decline in the use of tablets may indicate that smartphones with a large screen now meet the needs of users. As websites become more responsive to mobile browsing, there is less need for a portable tablet-sized device.

There may be a market for rugged smartphones with a large display that also can withstand the harsh conditions of daily field use.

The most popular external accessories or peripherals

The most popular accessory to use this year with mobile apps was an earphone, with 51% of respondents mentioning this. Camera or video camera and headset were both used by 42% of respondents.

There was a clear decrease in responses of “none” – only 17%, whereas in 2017, almost one in four of the respondents did not report using any accessories.

Respondents use voice a lot of the time, and also with mobile apps, since earphones and headsets are so popular. And, even though cameras and video cameras are very common accessories, situational awareness / field commanding apps are not nearly as popular, at least with those who responded. This raises the question of whether images and video are used offline rather than for sharing information on a situation or incident.

Put together, nearly 60% of respondents have plans to adopt broadband-capable devices. This is a slightly lower figure than in 2017, but a clear majority all the same.

A clearly smaller percentage of respondents planned to adopt broadband-only devices than last year, and only around 6% reported that they had plans to adopt TETRA radios. 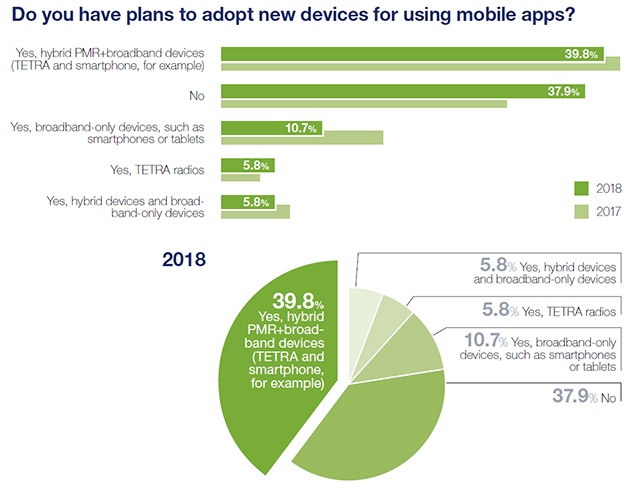 Hybrid devices are the route to broadband. People want a hybrid device – it has remained the most popular type of device for two consecutive years. The message from the users is clear: give us hybrid devices.

The graph looks surprisingly similar to the one that asked people to choose which apps they already use. 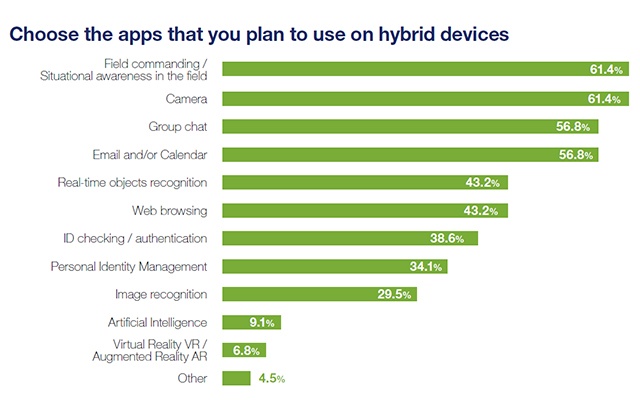 Those planning to adopt hybrid devices list apps complemented by the device. These use cases include group chat, which clearly benefits from access to the PMR side. After all, it is logical that users will want to text chat in the same groups as they talk to on the PMR side. Sharing images within that same team also makes sense.

Apps with the greatest potential

The top apps are very much the same as those in the other app related questions. 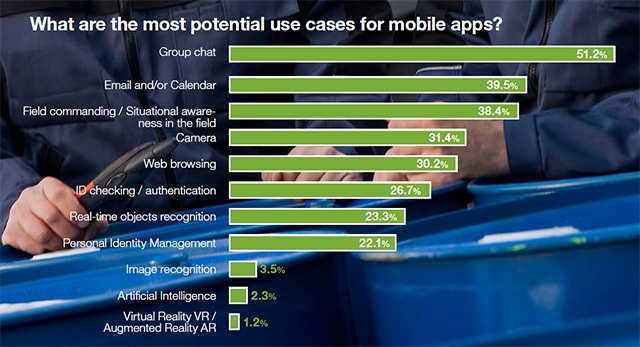 It is noteworthy how few believe in the viability of image recognition, artificial intelligence AI and VR/AR apps. This is a clear opportunity for app developers to imagine and deliver something that users have not yet considered.

The overwhelming majority of respondents (85%) reported they share images and 80% share textual information. Video is the third most popular data type to share, chosen by around 51% of respondents.

Users want and need to share images (and video). The ideal device will therefore have a camera and a sharing app.

Sharing images or video as part of professional operations is a significant need. Users may not be early adopters, but the trend shows that sharing of images and video is spreading from the consumers’ record-breaking activity to the professional arena.

The survey found three stand-out characteristics of mobile apps that professional users value the most:

The top three characteristics have remained constant throughout the survey history – and two of them are very different from the behaviors of consumers, who as a rule do not think much about their ownership of data.

It is clear that consumer apps do not meet these three needs as a rule, so common everyday consumer apps are therefore not suitable for adoption into professional use as they are.

People were asked to select up to three most important criteria when choosing a vendor of mobile broadband solutions.

The survey results show that proven experience (51%) and the ability to deliver solutions on the latest smart device platforms (44%) are considered the top priorities when selecting a vendor.

A large offering of different apps does not seem to be as important for the respondents. This has been the least appreciated requirement throughout the survey history, with only 6-8% of respondents choosing it. 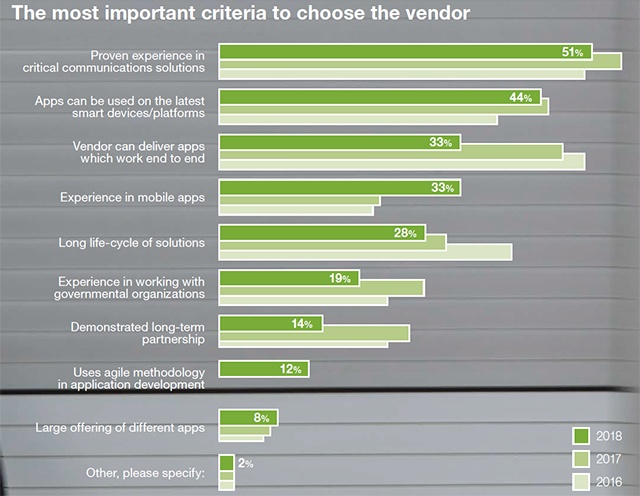 What’s more, their solutions need to be up to date, working on the latest smart device platforms.

Planning to adopt apps - and apps adoption in general

The survey asked respondents about their organisation’s plans to introduce apps in the future.

Four in ten report that they either have no plans to adopt new apps, or they do not know about any plans. However, nearly a third of this year’s respondents (29%) have decided to introduce new apps in 12-24 months or to start a trial. 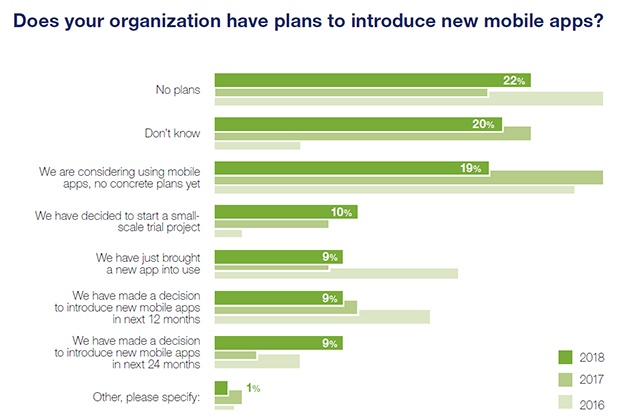 The survey also included two new questions – how people got the apps into the device, and how people identified apps that they use.

Most of the respondents (67%) downloaded apps into the device themselves. Only 7% of respondents used an organization-specific application store. 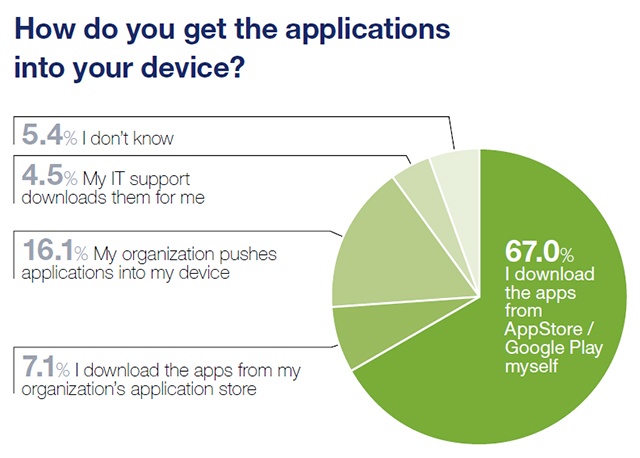 Searching for apps in the commercial application store, reading reviews and learning about new apps at conferences or events were the most popular ways to identify potential applications for use.

Organizations may be on the brink of realizing that the adoption of apps needs to be controlled and  organized. According to this years’ numbers, most users download their apps from generic app stores. In other words, app adoption does not look like it is being professionally managed.

Professional organizations do have room for improvement in terms of device security - only 7% of the respondents reported using an enterprise app store. 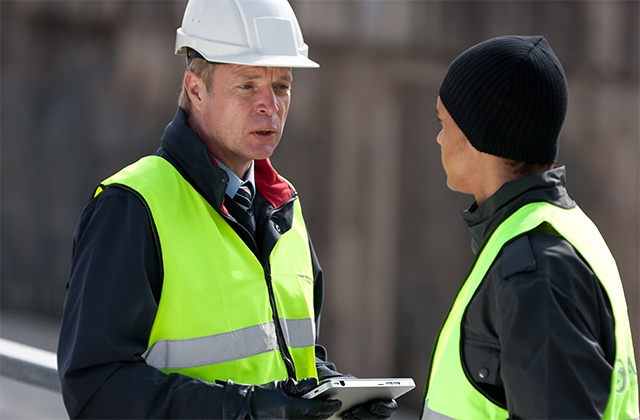 Airbus is looking for the best and most talented teams to improve the mission-critical communications of police officers, firefighters, caretakers, doctors and other life-saving and society-building professionals. For this purpose, Airbus organizes Critical App Challenges to uncover new and innovative ideas from the developer communities.

Which useful, secure and engaging applications and functionalities could be developed for the Tactilon Dabat device, which is both an Android smartphone and TETRA radio in one device? Subscribe to the SmarTWISP emails and stay up-to-date on this.

The survey asked respondents to name their biggest issue related to apps. The word cloud built from all the free-form responses shows that security is the major concern. 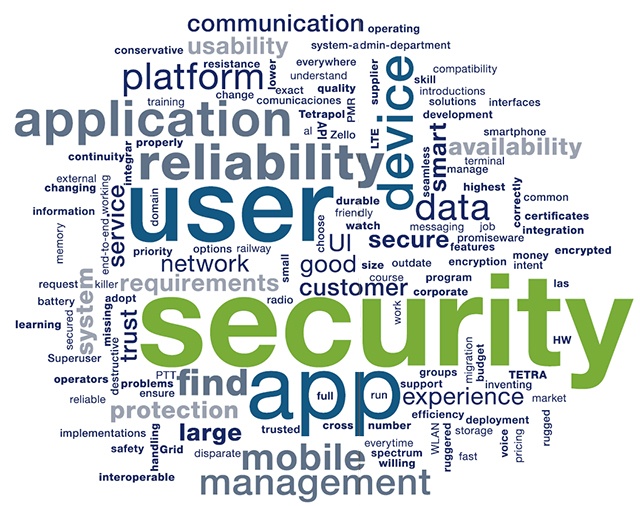 Some examples of the replies show how app developers could differentiate in the market and include:

“Integrating the communications to the Smart Grid”

Security is the major concern for the survey respondents. Other popular words such as “secure,” “reliability” and “trust” further stress this. Consumer apps that are intended for fun will not cut it when the going gets tough. Professionals understand this and require that app providers take this seriously.

Updated contents for you:

This blog post summarises the results from the 2017-2018 survey. The new 2020 survey report was published in May 2020. Download the latest survey report "Fingertip access to the latest trends in professional apps" -

Or, download the earlier 2017-2018 survey results in report format: