What are the most important features of a hybrid (dual-mode) device to help public safety and other industry professionals in their daily work? Who better to ask than the users themselves with their years of experience in using mobile communications in the field? That’s what we did and discovered five features that are essential in a hybrid TETRA+LTE device.

More and more, public safety and other professionals recognize the need for the same capabilities that they have on their smartphones. In their daily work, many professional users already use smartphones in addition to their radios. But it can be awkward and slow to use the two technologies because of the need to constantly switch between devices.

So, the question is: how to combine TETRA and LTE for reliable voice and broadband?

The answer: By using hybrid devices that have both TETRA and broadband technology. Tactilon Dabat, for example. Download its Technical Specification to see the details.

Hybrid devices can be used as a TETRA radio or smartphone according to the user's need, and they are essentially two devices in one. But which features should it deliver so that it will work for professional users?

Three different organizations in Estonia carried out a hands-on test in 2016 with a group talk application on a smartphone. These professional users had years of experience in radio communications. Their test reports were the basis for the list of top five hybrid TETRA+LTE device capabilities. These five must-haves are:

Let’s get started with the first must-have feature.

Because professionals need to concentrate on the task at hand, they appreciate devices that are easy to use. They cannot waste time on complex sequences or on trying to hit fiddly buttons.

Usability is important to both first time and experienced users, and it becomes critical when you need to use a device under high stress.

The phrase ‘easy to use’ means that the device will act as expected. Because people have a number of inbuilt patterns which they tend to follow, they might reject something new that does not resemble something they are already familiar with.

It is therefore no wonder that ease of use was the most important capability for the test group as well.

We’ve covered the ten most critical questions on usability in the blog post “The 10 things that make a PMR radio easy to use”. These ten usability criteria are based on Jakob Nielsen's usability heuristics.

Later, another test group were given Tactilon Dabat, a hybrid TETRA and LTE device with its large touchscreen. They intuitively used it like a smartphone. This was a valuable reaction, and it means that people can start using Tactilon Dabat with very little training.

The next step for any new user of a hybrid device will be to adopt the TETRA communication features and new data capabilities, so those must also be easy to use in the device.

Excellent voice is almost as important as ease of use.

However easy it may be to use a smartphone through its touchscreen, it is often far easier to exchange information by talking. A professional may have both hands busy, so texting or even pushing buttons may be too much to ask.

Voice communication is important and users expect excellent voice quality. Consumer smartphones often don’t match up as their audio system is usually optimized for music rather than speech.

In contrast, Tactilon Dabat is optimized for speech. It also cuts background noise that many professional users struggle with. 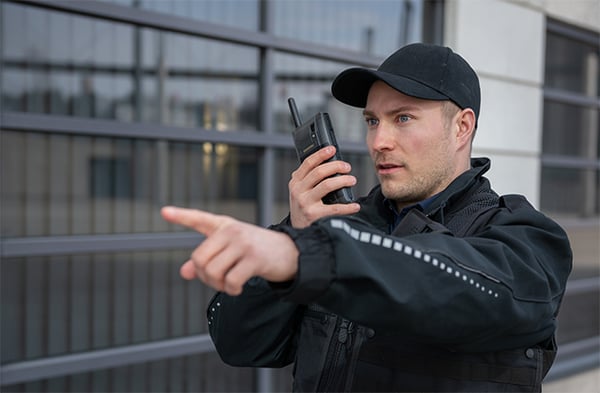 The natural way to use the device and its push-to-talk (PTT) key is to hold the device in one hand and operate the key with one finger of that same hand. When the screen is big enough for comfortable use of apps, the “push-to-talk key” in the app won’t be comfortable to operate. 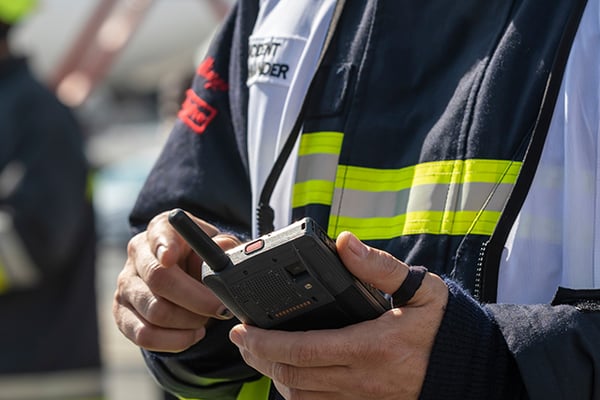 This is why the test users reported preference for a real PTT key. Heavier use simply requires a physical PTT key – in the right place on the device. The PTT key also needs to be easy to use even when wearing gloves.

Tactilon Dabat meets this requirement. What’s more, it can deliver comfort in using the Tactilon Agnet app through the physical PTT key - really, a hybrid PTT key, ergonomically located on the device.

Public safety and other professionals usually work in shifts, with a typical length of 7-8 hours. During that time, the battery needs to feed GPS positioning, camera, data services, group and one-to-one communications. Ideally, the battery should be able to handle this, and professionals reported long battery life as the fourth important capability. 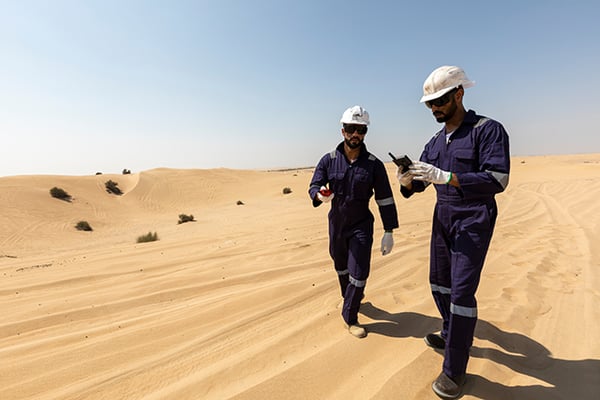 How long should the battery of a hybrid device last?

A battery capacity of 4,600 mAh or more will last through a 7-8-hour working shift on a single charge for certain.

But, if the day runs longer and the battery runs out of juice, the device should have a changeable battery. You will appreciate that you won’t have to find a place to recharge the phone, but instead quickly and easily change the battery.

"Eight tips to extend the battery life for your duty smartphone". Eight great ways to make your device run for longer between recharges.

You may also want check the reported battery lifecycle for the device – how many charging cycles the battery can manage without significantly losing strength.

Some test users needed to run operations on a boat. Their tools have to be waterproof and resistant to shocks, and this goes for hybrid devices as well. Consumer smartphones often do not meet this need.

Therefore, ruggedness was reported as the fifth key feature for hybrid devices. The users did not want to worry about the device getting wet. 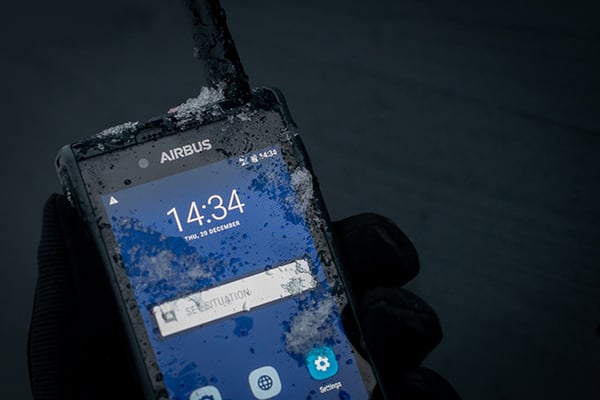 A tough smartphone / hybrid device has to be both IP65 and IP67 rated, to withstand the toughest conditions.

Download the infographic which cracks the IP rating code for you! 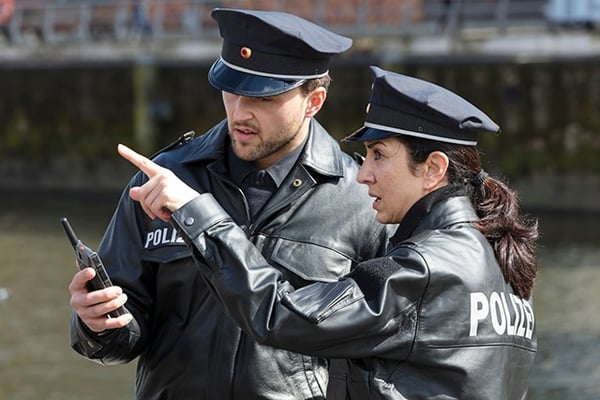 So there you have it: five must-have things that demanding professionals want their hybrid TETRA/LTE device to deliver.

If you are looking for more information on hybrid devices, check the blog post “This is what professionals really want to know about hybrid devices”.

Don’t miss the easiest way to stay up-to-date on the exciting possibilities of the new, hybrid world: subscribe to the free Hybrid Insider newsletter! You will get updates on hybrid devices and hybrid apps, and you will learn more about new ways of working in hybrid environments.

Why choose a hybrid device in the first place?

In addition to carrying one device instead of two, there are three other, equally great reasons to choose a hybrid device.

Easier situational awareness. Integrating the radio, smartphone and camera opens up a world of possibilities. With separate devices, you would have to check from the display which call, video, or app would give the best situational information at the moment. But in the new world, different calls, tasks, and apps can be prioritized.

Use two networks as one. One device beats carrying two when it can roam between the TETRA and LTE networks. Tactilon can use a TETRA network and a broadband network.

When Tactilon Agnet and the Hybrid Roaming feature are used, Tactilon Dabat will automatically move from using the TETRA network to using an LTE broadband network or vice versa.

Apps that add value. The test group concentrated on using Tactilon Dabat and Tactilon Agnet together, and they did not focus on other applications. But without other apps, the highly capable, hybrid PMR/broadband device would not be much more than a voice phone. That would be costly and fail to achieve the many benefits of adopting hybrid devices.

But even though the right app could help an organization work in new and better ways, how to find apps that solve real problems while also being secure?

This blog post may help narrow down the search for the right app: “Five fascinating ways to use critical professional apps”.

Your next smart step

Imagine working faster and more efficiently than ever before. Imagine having one device that does more than the rest of them.

Editor's note: Three different professional organizations in Estonia carried out a hands-on test with a group talk application on a smartphone. The insights in this blog post are based on the test reports. This blog post was first published in December 2017 and it has since been updated for accuracy and comprehensiveness. 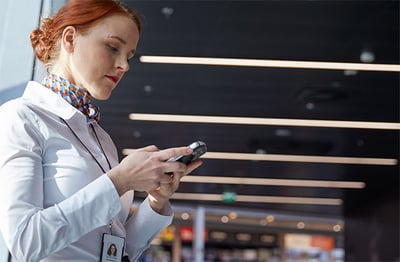 The previous Critical Communications World took place in November 2021 in Madrid. Now it’s June and the CCW comes again – now in Vienna. With only a few months in between, is it too soon? No! On the... 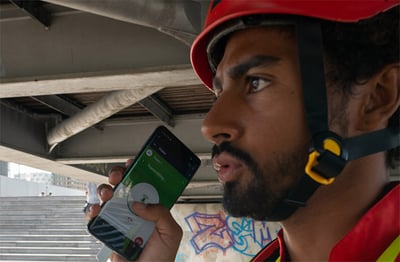 Do you use TETRA communications and plan to bring smart devices or apps into professional use? If you do, take a look at this blog post. It answers the question “How does TETRA fit with smartphones?” 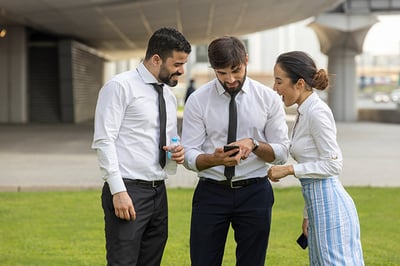